So here’s a story about how I was surfing around publishers websites months ago and looking at submission calls.  It’s something I do.  Because I really like writing to sub calls.  In fact, everything I’ve ever published has been a direct result of a sub call inspiring an idea.  (I need direction, just ask the Admiral).  So I saw this sub call and immediately my brain starting writing the character of Aaron Zeller.  I knew who he was and what his story was, and a quick discussion with the Admiral cemented who his love interest was.  And when I had those two pieces, the story just happened.  I wrote it over a couple of months, and before I was even that far into it, the Admiral planted the idea for a series.  And once that was in my head, there was no stopping it.  It went from one standalone book, to a series of at least five stories.  And  Something Like Hope, the first one, will be released on Sunday, June 28th.  That’s, you know, six days from now.

There’ll be links and stuff once they become available, but until then, the unofficial blurb: 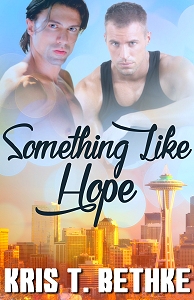 of the main characters on the show. While the cast and crew are mostly supportive, lead actor, Lucas Logan, is not. Aaron feels nothing but inexplicable coldness from the man.

Lucas admits his attraction for Aaron, but he is reluctant to act on his desires because of the potential detriment to his career should his sexuality become public. What they have between them could be sizzling hot, but is it worth the risks?

View all posts by Kris

Now You Say Something... Cancel reply

This site uses Akismet to reduce spam. Learn how your comment data is processed.