Will Grant only attends the PFLAG meeting because his mother guilts him into it. But the instant he hears the night’s speaker, Will is glad he showed up. Joshua Rhinehardt is dynamic and engaging. Although Joshua isn’t physically Will’s type, Will can’t get the man out of his head.

Joshua may be comfortable in his own skin, but it isn’t often men like Will are attracted to him, and he’s not comfortable changing for someone else. He wants to make a life with Will, but his own insecurities keep getting in the way.

Will’s unwavering acceptance helps Joshua see that when two people connect, physical appearance just might not matter at all.

As it often does, the bad news comes in the middle of the night.

When attorney Ben Winters’s close friend takes a bad spill and ends up in the hospital, he flies across the country to be there for her.  His instant attraction to her brother takes him by surprise.  Wanting Zack Anderson is easy; actually having him is a bad idea.  While the two connect over concern for Zack’s sister, there are many reason to fight the attraction brewing between them.  Things heat up as Ben’s friend begins to show improvement, but the reasons not to get involved with the younger man remain the same–long distance relationships never work and Ben doesn’t do one-night stands.  But there’s one powerful reason to give in: Ben has never wanted anyone more.

When State Trooper Travis Kinslow is injured right before Thanksgiving, the only positive is that for once he won’t be working during the holidays. Since he has no family, Travis was absorbed into his best friend, Joe’s, and he considers them as good as his own. Everyone except Joe’s brother Noah. Travis has been in love with the younger man for much of his life, but he’s always kept his distance.

As an ER nurse, Noah is a caretaker by nature. When his brother’s best friend is hurt, he’s happy to help Travis while he heals. He’s only ever allowed himself to think of Travis as the next best thing to an older brother, but by the light of the Christmas tree, Noah finally sees Travis’s true feelings. And in that moment, everything changes.

When faced with opposition and a Christmas nothing like they imagined, will their hopes for the future be enough to carry them through? 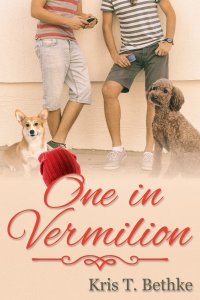 Wyatt Janson needed a change of scenery in the worst way, so he packed up his dog and moved to a small tourist town. When he spots a man in a vermilion beanie, he’s intrigued. Why would someone would wear such a hat in the middle of summer? Their paths keep crossing, and Wyatt soon learns that Truitt Rackley owns a dog grooming and training service. It’s the perfect opportunity for Wyatt to meet Tru.

What begins as friendship quickly blossoms into more. But Tru’s happy demeanor hides a sad past. The hat he wears is only one part of it. Tru needs Wyatt’s support as he deals with the fallout, and Wyatt is glad to be able to provide it. Now that he’s found Tru, he knows he’ll do whatever he must to keep him. Can two broken men find the happily ever after they’ve been searching for?

Mechanic Jordan Hart is down on his luck, so he gladly accepts a temporary job servicing tractors at a hazelnut farm in Newberg, Oregon. He doesn’t expect to be attracted to his boss, Beckett Shaw. Still working on embracing his bisexuality, he’s reluctant to start anything, but Beckett’s gentle coaxing convinces Jordan to take a risk.

Beckett has vowed not to get involved with anyone until he can restore the Shaw Farms name as a leader in hazelnuts. But there’s no denying his interest in the shy mechanic who shows up at his door. Just as they begin to find a balance, outside forces threaten to tear them apart. Job opportunities force Jordan out of the Portland area he loves so much. But when danger comes too close to Beckett, Jordan must decide if he can follow his heart to the Willamette Valley… and straight back to Beckett.

When Jesse Reid needs emergency surgery, he calls his neighbor to come pick him up instead of one of his many family members. As the youngest of nine, Jesse is used to feeling like a leftover, and he doesn’t need their coddling.

Holden McRae is a big, beautiful man, everything Jesse wants. But Holden has made it clear he doesn’t want Jesse as a submissive.

Under the influence of Holden’s care, Jesse becomes bolder and makes Holden see what he’s been missing. The two men’s interests line up, and the attraction that has always been there is something they can finally act on. As Jesse heals, he shares parts of his life with Holden, and Holden helps him see he’s so much more than #9. Their love might not be the most conventional, but maybe it’s exactly what both men need.

Captain Brody Phillips commands the space station Elovaris, and excels at his job. He thrives on the challenge that comes with running such a large facility on the edge of the neutral zone and takes pride in caring for the two thousand beings aboard. When one of his commanders asks for help, Brody doesn’t hesitate. And not just because he’s attracted to the man.

Sol Sousou is part of the Ssarften military stationed on Elovaris. He also has cycles where he is biologically driven to mate. With no time before his cycle hits, he asks Brody to take care of him during this time.

Brody wants more than just a few nights. He wants everything with Sol. But before he can voice his desires, Sol brings him shocking news. Their time together has resulted in pregnancy, and Sol fears he must go back to Ssarfta. Brody will do anything he has to in order to keep Sol and his children with him. Can he convince Sol they are meant to be together?