Hero Worship was originally part of an anthology several years ago, but when the rights returned to me, I knew I’d eventually put it back out in one way or another. JMS gave me the opportunity.

If you haven’t read it yet, you can get it in just one week! I’ll have buy links up soon. I’ve also written several flashes since it’s first release, featuring Matt and Alex, because I just couldn’t let them go. After release, I’ll pop em all in so you can check them out.

Paramedic Alex Sullivan has always thought Matthew Carter was attractive. There are reasons why Alex knows he shouldn’t get involved with the younger man. 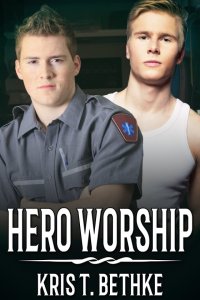 Taking Matt on as a housemate seems like a recipe for disaster. But Matt not only proves to be the perfect roommate, he also makes no effort to hide his attraction to Alex. Matt knows what he wants. Can Alex be the hero Matt already thinks he is?